Two of my favorite features of the Fuji X100s have to be the leaf shutter and built in ND filter.  For anyone who works with strobes, these are two unbelievably useful features to have in a camera. If you aren’t familiar, ND filters reduce the amount of light entering the lens/camera.  With out getting too technical, this is useful when you are shooting in bright light for example and you want to use a wider aperture.  Without an ND filter, this is especially difficult to achieve if you are also trying to shoot with strobes in that same environment.  When shooting with strobes, most cameras have a limited maximum shutter speed you can shoot with.  Shooting faster than this shutter speed will result in the physical shutter of the camera showing up in the photo, cutting off some of the light produced by the strobe.  This isn’t an issue with a camera that uses a leaf shutter as opposed to a focal-plane shutter. Leaf shutters allow you to sync a strobe at pretty much any shutter speed.  The only limitation then becomes the speed of what you are using to trigger the strobes with from your camera, as well as the flash duration of your strobes.

This past week I set off to shoot a shot I have had in my head ever since I got the camera.  I wanted to shoot a sunset cross-country skiing action shot lit with strobes.  The X100s was the perfect camera to help me get the shot.  I asked Phil Anschutz, a division 1 college skier, if he would help me out.  He was onboard so we set out to shoot. 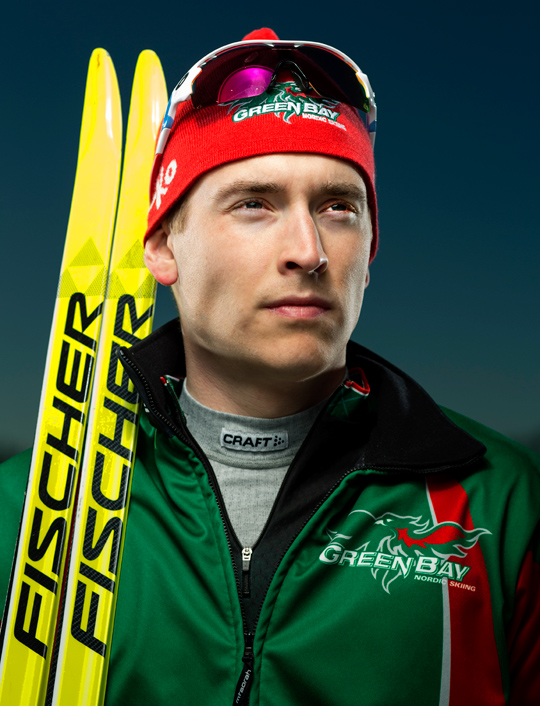 When we got to the location, the sun wasn’t quite as low in the sky as I wanted it, so we started by shooting a lit portrait.  I shot the portrait with my Canon 5d mk III and an 85mm lens.  I had to shoot with a –3 stop ND filter to be able to knock down the ambient light and shoot at a wider aperture.  I lit the shot with Elinchrom strobes.  The main light was a beauty dish set above camera in front of Phil.  I then used two more strobes with high performance reflectors behind Phil on each side, rim lighting him.

After we had gotten the portrait shot, we moved on to shooting the action shot.  I called upon the abilities of the X100s for this picture. I eyed up my shot and lit it very similar to the portrait.  Beauty dish for a fill just left of camera with two strobes with high performance reflectors rim lighting Phil as he skied.  The tough part was timing not only when Phil was in the light “sweet spot,” but also him making sure he was in a good looking physical position as he skied past the lights. The camera’s leaf shutter allowed me to sync my strobes at 1/500s, helping me to knock down some ambient light but also making sure I didn’t get any ghosting as my strobes froze the action.  The set up worked flawlessly, helping me get the exact shot I was hoping for.

In my opinion these are some pretty powerful features to have in a compact camera that costs only around $1,200.  This is just another reason why my X100s is one of my favorite cameras.

Remote cameras are nothing new to sports photography.  In fact, for major publications and news agencies, remote cameras are a regular part of shooting an event.  A little over a week ago I shot a basketball game between UW-Green Bay and Valparaiso for UWGB.  I had an opportunity to borrow a fellow photographers Canon 1Dx for the game, giving me three bodies at my disposal for the night. (I currently have two Canon bodies that I shoot with that are my own).  I thought, what a good opportunity to set up a third camera as a remote for the game.  I like to take every opportunity possible to give my client a different angle than what they are use to getting from shooting a basketball game.

The only issue I had that day with getting a remote set up for the game was the time crunch I was under.  I started game day by waking up a 4am to go shoot B Camera video on a shoot an hour south of Green Bay.  I knew as soon as the video shoot was over, I would only have a small amount of time to drive back home to shoot the basketball game. Normally one of my favorite remote camera positions is to shoot directly down on the basket from the rafters of the Resch Center in Green Bay. The only problem with this position is it takes about a half hour to get a camera set up, ready to shoot in that position. Instead I decided to take a quicker route and set up a floor remote. 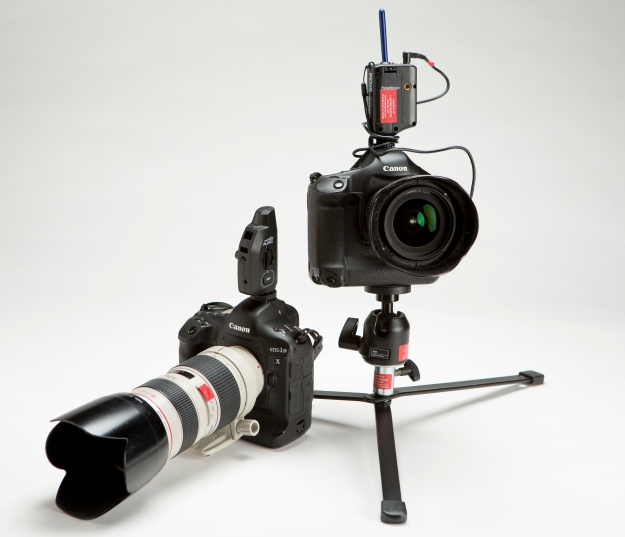 The set up I used is fairly simple.  I use a ground level light stand with a ball head attached.  I set up my Canon 1D mkIV with my wide angle zoom lens and set up the camera to fire every time my main camera fires. I used Pocketwizards to trigger the camera remotely. I composed my frame, locked down my focus and was ready to shoot. I like this set up because not only is it quick, but it’s also easy to set up. It also allows the remote camera to sit next to me while I shoot the game. I can keep an eye on it, making sure it is triggering and its not getting messed with by fans. 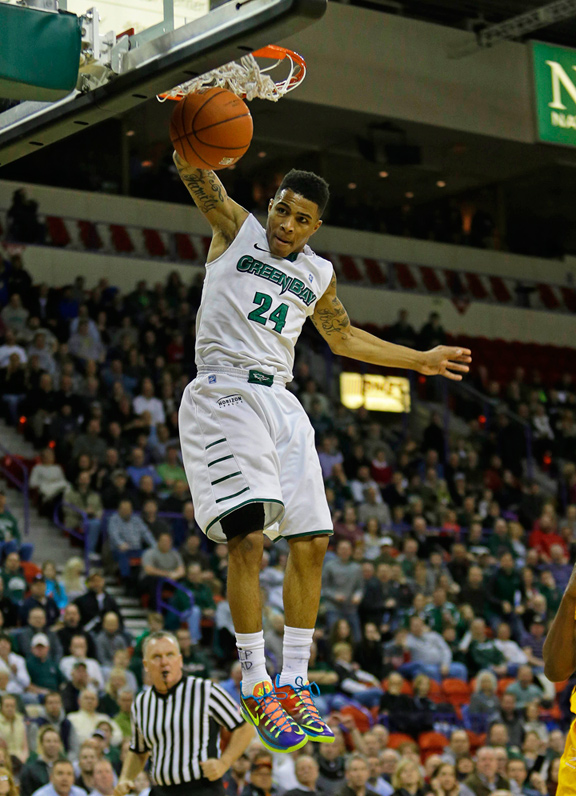 The corresponding frame from the remote camera. Canon 1D mkIV shot at 17mm.

The floor set up worked out very well for the game.  This angle allowed me to piece together in Photoshop, a 7 shot sequence of UWGB’s Keifer Sykes on a break away dunk all in one shot (first photo of the post).  It was a picture that my client had never gotten before and they were very excited about it.